A Stocking From St. Nicholas

The following story is an original adaptation combining the good girl/bad girl motif with legends about St. Nick. These good/bad girl stories are sometimes interpreted as being the two sides of our human nature. Each one of us possess some good girl traits and some bad girl traits, Which do we choose...the one we feed.

Long ago an orphan girl named Myra lived in a house with a widow woman she called “Mum” and her spoiled daughter, Deidre. They had Myra do all the work while they sat around and made each other laugh with bits of town gossip. Or, if there was no gossip that day, they laughed at Myra’s dirty clothes and unkempt hair. When Myra heard that, she took her fingers and tried and comb her hair and brush off the dirt from her one and only dress to try to make herself presentable. But, no matter how hard she tried, she still looked like a street urchin. Her pathetic attempt to better herself made the other two laugh even harder.

Winter started early one year and the family found that they didn’t have enough coal or wood for the stove.

So, one day, as the sun started to set the old woman told Myra, “Get up and go outside to search the coal bin for any coal and, if you can’t find any coal, search the woods until you have enough wood to keep us warm.”

Myra couldn’t believe what she just heard. “But, mum, it’s bitter cold outside and the sun is beginning to set. How will I ever see?”

“Take the blanket the dog sleeps on and, if you hurry, there is enough twilight for you to see. Now hurry on for I feel a draft!”

Myra grabbed the old dog blanket and whispered, “Sorry about that Muggins. I’ll reward you with half my piece of bread that Mum gave me for supper when I get back.” And she hurried out the door. She gathered her piece her bread and tucked it under her arm for she had learned long ago that she shouldn’t leave any food behind. They would eat it before she got back.

First, she went out back to the coal bin and looked inside. She felt around with her hands until they lit upon a single piece of coal. But, she soon realized that she had no place to put the coal while she looked for some fallen wood. She had an idea. She took off one of her stockings and placed the coal inside. Then, she walked along the path that led into the woods. The path got darker and darker as she walked along. The trees rose taller and the shadows were deep. A nasty north wind blew through the trees and it made Myra shiver as she walked. She looked along the path to find some fallen branches, but the forest floor was bare. She was about to give up when she found a branch that had fallen across the path. She quickly went over and began breaking it apart. She stuffed the pieces into her stocking.

Then, she thought she heard something. At first she thought it must be the moaning of the trees as the north wind bent their branches low. But, no, this was more of a human voice. She looked down the path and could barely make out the figure of an old man picking icicles from a tree. Why, the poor fellow looked half frozen.

Myra quickly walked over. She could see in the dimming light that the old man had a long white hair and a shaggy beard that looked as if it hadn’t been brushed in years. She could tell by his gaunt face that he also hadn’t eaten. Frost was beginning to form around his lined face.

“My-my, my good man, what are you doing out here? Don’t you know you could catch your death of cold?” And, without thinking, she took off her blanket and placed it around his shoulders.

The old man grabbed the blanket and with shivering hands muttered, “Oh, thank you. I thought I’d freeze to death out here and no one would ever find me. You are so kind.”

Myra looked again at the old man. He looked so hungry, she thought the wind could blow him over. She took the bread from under her arm and offered it to him. He took it and began to eat it. Myra stood silently by as she watched him eat her only meal for that day. He had almost finished when he stopped and pulled off a good-sized chunk and offered it to Myra. Myra was ready to eat it, when she remembered her promise to Muggins. So, she slipped the final piece under her arm.

“You have been so kind,” said the old man. His strength seemed to quicken with the food and warm blanket. “I was wondering if I could ask a favor of you. You see every year at this time, I go on a long journey. My hands are cold and sore. I can’t seem to brush my hair. Do you mind?”

Myra smiled. “Why, let me do it for you.” She took his brush and brushed out the knots and tangles. She brushed out the nits and bugs that had made their home in the folds of his long hair and beard. “There!” she said. “You look twenty years younger. Now, I must get home. The family is expecting me to bring home some coal and sticks for the stove. I’ve already been gone too long. I wish you fair journey.” Myra started to leave when the man rose up. The dog’s blanket fell to the ground. And there stood a man with rich, embroidered vestments, a mitre hat on his head and a golden staff in his hands. 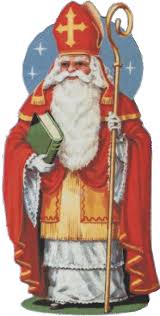 Myra’s mouth dropped open.  “Who, who are you?”

“Well, Myra, once a year I travel the earth looking for good children. You Myra are the most helpful, the kindest, the most selfless person I have found this year. When you get home and empty your stocking, hang it on the fireplace. Tonight when I come by for my annual visit, I will fill it with good things.”

For the first time Myra realized what evening it was. It was December 5th. Tomorrow was St. Nicholas Day. Could it be? “Are you, are you…”

“Yes, Myra, I’m St. Nicholas. Now hurry on home. Be sure to take your blanket with you. Muggins may need it.” Myra beamed as she bent down to pick up her blanket. When she looked back, St. Nicholas had gone.

Myra hurried home. Mum and her daughter were furious. But, Myra just kept babbling on and on about the adventure she’d just had. She told them all about the man in the woods and how he had changed into St. Nicholas. Mum and Deidre didn’t believe a word of it until Myra took the piece of coal and the sticks and put them into the stove in the middle of the room. Even though it was only one piece of coal and one branch, the fire caught on immediately and filled the room with a glorious warmth. Perhaps, the wretched girl was telling the truth. Then, Myra kept talking about how St. Nicholas walked on the earth every year at this time, and he told her to hang her stocking on the fireplace and wait until morning when he would fill it with good things. She danced over and hung her stocking from a nail on the mantle.

Mum and Diedre’s stunned silence slowly turned into jaded envy. Why should this tramp, this street urchin that they had so generously taken in, get all this? They deserved what she got and much, much more.

Mum looked at Deidre and said, “You must go out and find that old man. Do as Myra did and bring back even more riches.” Deidre didn’t relish the idea of going out into the woods, especially now that it was dark. But, her mother was adamant. She gave her daughter her boots, coat, and mittens. She shoved the dog’s blanket, a stocking from her dresser, and a moldy piece of bread into her arms. Since it was dark now, she gave her a lighted torch and booted her out the door.

Deidre walked on and on. She thought her feet were half frozen before she saw the old man sitting on a rock. Finally, she thought, it was about time! She marched over and threw the smelly dog blanket at him. “There you are, old man. Whew! That dog sure is smelly - not half as smelly as you though. Are you hungry? Yeah, well take this to eat.” She threw the moldy bread to his feet.

“Thank you. This is most kind of you.” When he half finished the bread, he offered her some.

Deidre made a horrified face. After all, this old man had been gnawing on it and it was moldy! “No thanks. I’ve sort of lost my appetite.”

“You have been so kind, but would you mind brushing my hair?

Brushing his hair? Myra never mentioned anything about brushing his hair. “I don’t have a brush. I’d have to use my fingers!” The thought of touching this man’s hair with her bare fingers made her cringe.

“Oh, but I have a brush,” and the old man reached into his bundle and handed her his brush. Deidre picked the up brush with two fingers and lightly glazed the brush on his hair. “There you go.”

After a few more seconds, Deidre said, “Well, I have to get home. She bent over to pick up her stocking and when she looked up the old man had changed into St. Nicholas.

“Deidre, I want you to take your stocking home and hang it up on the mantle tonight. I go about filling stocking this very night. You will be rewarded for what you did tonight.”

Deidre turned around and stomped back down the path. When she got home, she put her stocking on the mantle. “This better be worth it,” she mumbled under her breath.

The next day was St. Nicholas day. As the girls took the stockings down, they could see that they were filled. Myra was so pleased. She had three beautiful oranges in her stocking. She was so happy she cried out “Thank you, St. Nicholas!” But, when Deidre opened her stocking, all she found were sticks and single piece of coal. “You tricked me!” she screamed at Myra. “Get out! Get out of our house.”

Myra gathered her things and rounded up Muggins. They lived on the streets before and they would do it again. As Myra and Muggins walked toward town, they sat on a rock to rest. “I’m hungry, Muggins. At least we have some oranges.” But as Myra peeled away the rind, she discovered that underneath the rind there was a solid gold ball. It would be worth a fortune. She soon discovered that the other two oranges held treasures as well - precious jewels and pieces of silver. Needless to say….Myra had a rich and satisfying life.

To this day, boys and girls put their stockings on the hearth for St. Nicholas. Some kids get candy and small toys, but, it is said, that, if you are a good boy or girl, and receive an orange, you will live a happy and prosperous life.