The Family Tree: A Hodgepodge of Memories

I remember our first Christmas, forty years ago, after Larry and I were married in 1967. 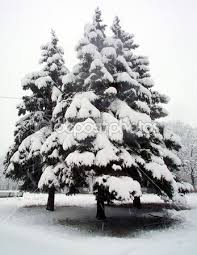 We were young, impetuous, in love...and broke - a usual state of affairs over the years. So, Larry and I decided that, no matter what, we would get ourselves a real live tree. No artificial tree in our home...no, siree! We discovered that one could save a couple of bucks by going out to the Freedom Farm tree farm and cutting down one's own tree. How romantic! So, we took off for the tree farm, as a gentle snow laced the sky. Could this more perfect? Did we think of gloves and boots. No! We had love to keep us warm.

What we didn't expect was "tree tagging." It seems that smart people came out to the tree farm and tagged the trees they wanted. So, we walked, and walked, and walked (did I tell you it was snowing and we had no boots?) and walked until finally we found "a" tree. Not the perfect tree I dreamed of, but, at least, untagged. It had a wonky trunk, and some missing branches, and was not nearly as big as the other more beauteous trees, but by this time, we did not care. My handsome husband gave that tree 3 or 4 or 9 or 10 mighty whacks and it fell to the snowy earth. Now, we had to walk, and walk, and walk, (did I tell you it was snowing and we had no gloves?) and walk until, at last, we got back to our car. Somehow, we pushed and shoved the blasted...er, beauteous tree into the back of the car.

I don't know how many of you have ever cut down a live coniferous tree, but there is something the poets forgot to mention. A little thing called...tree sap! Larry had it all over his coat, his hair, and mostly on his hands. As we drove back to our apartment, his hand kept getting stuck to the steering wheel and his right eye was sealed shut. I had the regrettable and uncontrollable urge to giggle. Ooops. Not the wisest choice, since it preempted the end of the proverbial honeymoon. After that, we got our live tree from the Boy Scouts tree lot on State Street.

But I digress, fianlly we got the tree back to the apartment. Oh, did I mention that it was an efficiency apartment? That tree that seemed so small out in the woods, now took up half the living room. We pushed and shoved the beast into a corner and had to watch TV through the limbs of the tree.

But, we couldn't just buy a tree. Now, we needed a tree stand, lights, garland, tinsel,   Ka-ching! Well, money spent and tree decorated, we sat down on the couch to admire our tree...but something was missing.

Ornaments! We didn’t have a one to put on the tree.

I went to my mom and said, “Mom, can I have some of the ornaments that you put on your tree?”

She gave me a rather odd look that I did not understand at the time. Then, her face changed and she said, “Sure, go ahead, take what you want.”

With a shoebox in hand, I went up to the old attic that was constructed of floor joists. I gingerly made my way balancing from one joist to the other, so I wouldn't slip and fall to the room below (yes, I learned that from experience). I opened up the cardboard boxes and searched for my favorites. There were gnomes, and Santas, and angels, and bells.  Then, I saw a couple that I had made. I laughed when I saw the doily doll, the glittered pine cones, and the icicles that I made by twisting the metal strips from the Old Folgers’s coffee cans. (Oh, I am dating myself there.) I put them in my box. I took my treasures home and put them on the tree. At least, I would have some of my old ornaments to comfort me on this, my first Christmas away from home.

The next year I splurged a bit and bought a new ornament for the tree. It said “Baby’s First Christmas” and I had "Christine" (our oldest daughter’s name) engraved on the bottom. Over the years there were two other such ornaments added to our tree – Amy and Brian.

After the kids left the crib, I took the baby mobile apart. It had the cutest little wooden angels. So, I just added some string and put them on the tree.

As the kid got older, I often bought some sort of ornament kit to do during the holidays – wooden ornaments that you could punch out and then paint (they looked so pretty on the box), plaster of Paris ornaments that you had to mix and set and then paint. (that was a messy one). I even remember the year I bought Shrinky-Dink ornaments - which would have been really cute…if I hadn’t left them in the oven! (it smelled like a chemical plant for weeks after that)

Oh, there were other ornaments…McDonald’s (where we spent a lot of quality family time) had puffy ornaments that came in the happy meals. Of course, we had to collect all 10! – including the Hamburglar and Ronald, himself. We ate a lot of happy meals that Christmas season.

Then we moved to our new house. We had a bigger living room and an even bigger live tree.

As the kids got into school, they started to bring home the art projects that doubled as Christmas ornaments – bells, or trains, or stars – all with their pictures pasted onto the ornament and painted in the colors of the season.

Then there were scouts – boy scouts and girl scouts. They went out of their way to make the biggest and, dare I say, the gaudiest ornaments. Pom-poms decorated to look like sick alien snowman…pinecone people glopped with layers and layers of glitter… and hands pressed into plaster with their names and dates etched on it for all of eternity.

The tree was beginning to fill up.

Then came the collections. My kids collected everything. Chrissie, at one point, wanted to become a clown. So, St. Nick (he always left a stocking on December 6th) often gave her ornaments in the shape of clowns or with "Barnum and Bailey Circus" written on them. 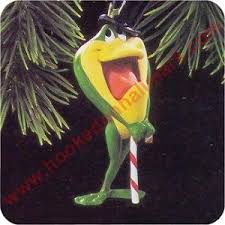 Now our son, Brian, always did march to a different beat. He liked Warner Brothers – not anything normal like Bugs Bunny or Porky Pig, no, his favorite were the Tasmanian Devil, the alien - Marvin the Martian, and that classy, dancing amphibian - Michigan J. Frog. Do you know you can find ornaments of dancing frogs? It’s true. St. Nicholas brought them all.

Later, Brian switched to “The Simpson’s.” I sheepishly admit that Bart had a place on our tree. Then, when Brian was teenager, he decided he liked (gasp) Ozzie Osburn. I tried to be tolerant of my kids’ tastes over the years, but really, this was making me cringe. Then, one year, I saw it on our Christmas tree – a black ornament with Ozzie’s distorted face glaring back at me! I took the ornament off the tree and gave it back to Brian…not on my tree! Well, it became the family joke. I’d take off the ornament and somehow it always mysteriously it reappeared – hiding behind a star or on the back of the tree always sneering at me. After awhile, it just made me laugh.

There were times, I have to admit, that I longed for some of the trees I saw in store windows or at craft fairs – trees with themes or done in special colors. Our tree was such a hodge-podge, but I couldn’t bear to part with any of the ornaments on our family tree. They each held a special memory.

Then, the year came when Chrissie, our oldest, moved out of the house. She was delighted that she was on her own, but found herself in the same position Larry and I were in when raising a family – broke. She came to me around Christmas and said, “Mom, can I have some of ornaments from the tree?”

By now the tree was laden down with ornaments. So much so, that some ornaments remained in boxes. “Sure,” I said, “help yourself.” She took a plastic tub and filled it with clowns and the special ornaments that she had made. Honestly, you couldn’t even tell tree was any lighter.

Then a couple of years later, Amy moved out, and the scenario repeated itself…”Sure go ahead.” She loaded up on Strawberry Shortcake, Disney characters and her special ornaments that she had made. By the time she was finished, the tree definitely looked a lot lighter.

It was inevitable…the time came for the empty nest syndrome. Brian was moving out to live with some friends. He was the last child that I ever expected to ask, but he did. “Mom, our tree looks like Charley Brown’s Christmas tree. It’s pathetic. Can I take some of my ornaments?”

For the first time I understood my mother’s expression, when I had asked that same question so long ago. For a fleeting moment I held that same expression until I heard myself say…"Sure, go ahead, help yourself."

That year, the character of the tree never quite recovered. Gone were Michigan J. Frog, and Bart, and I even missed old Ozzie.

Don’t get me wrong…our tree was lovely. For one thing, I finally gave in and, after 3 decades of picking pine needles out of the carpet, I bought an artificial tree. I never thought I would say this ….but I love my artificial tree! The lights are just so bright and perfect…and (ta-da!) no needles! Now, with the kids gone I could buy some really nice ornaments - my favorites being my collection of Campbell Kids ornaments. But, it just never was the same. Something was missing.

Then, in 2004, our daughter Chrissie came over on St. Nicholas Day. She gave us two new picture-ornaments to put on our tree – one said "Grandpa" and one said "Grandma." I realized then that our artificial tree had a rebirth. A new character, our granddaughter – Drew Adele was starting to make our family tree come back to life.